When I read the other day that legendary comic book artist George Perez is retiring, I asked the question “Did he ever draw a cover upon which Hawkgirl appeared?” I went through my “collected list” and “wish list” that is maintained at comicbookDb.com, and I could not find a single instance where Hawkgirl was drawn by George Perez on the cover of a comic book. My research included scouring the minute detail on the “Crisis on Infinite Earths” covers. I did find at least one Perez cover that Hawkman appeared on and this one piqued my interest as it was a “centennial” cover: Justice League of America #200 (March 1982).

I found it in fine condition for $7. It is a wraparound cover that includes all current members of the Justice league of America. There is in my opinion one glaring exception and that is that Hawkgirl is neither on the front or the back. In fact, she has nowhere to be found between the covers. She was, after all, a member of JLA. The story even includes former members Adam Strange, Phantom Stranger, and Elongated Man. So, what was up with that?

Before considering the whereabouts of Hawkgirl at the time, here is a little background on George Perez. He has been around since the late Seventies when he started out in his early twenties drawing for DC. He best known for his work on three DC series: The New Teen Titans (1980-1984), Crisis on Infinite Earths (1985), and the Wonder Woman reboot from 1987 until the early Nineties. He has drawn hundreds of covers during his 40+ years career, but as I said, I cannot find a Perez cover with Hawkgirl on the cover.

To understand what was going with Hawkgirl in 1982 we need to go back about a year. In 1981, Hawkgirl appeared a number of times. She was in World’s Finest #267 to #270, #272 & #273. Also, Justice League of America #190 and DC comics presents #37. All between March 1981 in November 1981. The Hawks did not have their own series, they were regulars in “World’s Finest,” the bi-monthly anthology series that featured a regular Batman and Superman team-up.

In World’s Finest #267 (Mar 1981) – Carter and Shiera continued to live in Midway where he is the curator and she is his wife/secretary. Midway is attacked by swarm of giant insects from outer space. These are the Silver age Hawks, unchanged from the 1960s. The winged wonders, who through the use of ancient weapons coupled with advanced Thanagarian technology save the city (and the world) from an attack by fantastic creatures lead by a giant bug named Lord Insectus.

In the next issue of World’s Finest, the Hawks continued to fight Insectus. There is a scene that is reminiscent of the golden age Hawks. It is where Hawkman sends out a message (=WHEET WHEET=) and calls up a flock of hawks to come to his aide. Imagine trying to make a live-action Hawkman movie or TV series in 1980s. It would have to have been animated.

Then Katar is “stung” by Insectus and he will die unless he can get the antidote. Shayera realizes that Earth medicine is not advanced enough, and she immediately takes her husband up to their Thangarian star cruiser orbiting 22,300 miles above the equator. Taking the ship through hyperspace, Hawkgirl pilots the ship back to their home planet of Thanagar, 433 light-years from Earth.

In World’s Finest #269, instead of only recognizing the male half of the winged wonders, the story’s masthead read “Hawkman and Hawkgirl”.

The story refers to the story-arc from Showcase Presents 101 – 103 where they had been banished from Thanagar by Hyanthis, an evil villain who has become the empress of Thanagar. At the end of this issue, it appeared that Hawks had been detected and being pursued by an armada of Thanagarian starships. 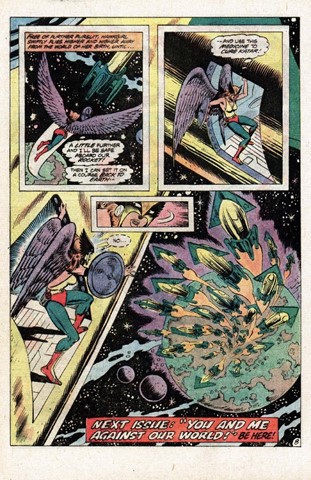 In the next issue of World’s Finest, we see that the armada is headed not towards Katar and Shayera, but following a lead ship through a warp opening into hyperspace. Following the armada through the portal, Hawkgirl discovers a dangerous stowaway on-board their ship. It is one of the Hawk’s oldest villain, Carl Sands, AKA Shadow Thief.

The story took up again in World’s Finest #272. It was in this issue that Hawkgirl told us that from now on, she wanted to be known as Hawkwoman. This was a convenient thing to have happen in 1982, as it makes it easier to have in 2019, a Hawkwoman (Shayera Hol) and Hawkgirl (Kendra Sanders). 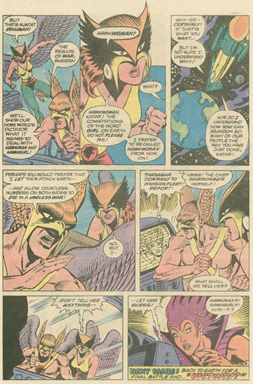 Having saved Earth from destruction, the Hawks had one final task at hand. They needed to uncover the fifth columnist who was planning to betray Earth to the Thanagarians. Things come full circle when the mole is revealed to be none other than the oldest nemesis of the silver age Hawks, that shape-shifting criminal Blyth Roch. He first appeared twenty-years earlier in Brave and the Bold #34 (March 1961).

Then Commissioner Emmett says something that sets off Hawkgirl (Erm… Hawkwoman). Angered by something, she goes to the nearest window and flies off.

The cover of World’s Finest #274 touts the addition of new series featuring Zatanna. 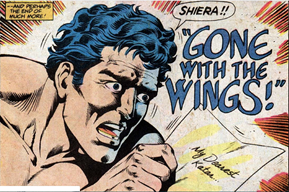 Apparently, she has gone off on her own to try and rescue the Thanagarian Armanda that they had earlier locked in hyperspace. And there you have the explanation for why Hawkgirl was not present for Justice League of America #200.

Those DC Writers think of everything!