Here is another update of the Hawkgirl/Covergirl Collection. This time around I got two crown jewels: JSA Secret Files #1 and JSA #2. These two issues mark the first appearance of the modern day Hawkgirl as Kendra Saunders. Also, added two more from the Brightest Day series from 2010/11 and one from the JLA series. Then there is Secret Origins #11 from 1987 and yes, I realize that Hawkgirl does not appear on the cover. It is what is inside that matters. See this recent post for an explanation.

Written by James Robinson, David S. Goyer And Various; art by Scott Benefiel, Mark Propst, and Various; Cover by Stephen Sadowski and Michael Bair. A week before the all-new JSA monthly debuts, get the inside story on how the latest incarnation of the original super-team came together for the very first time in an exciting one-shot! Regular JSA writers James Robinson and David S. Goyer join the Sensation Comics art team of Scott Benefiel and Mark Propst to present the team’s first gathering, along with the final fate of one of the Justice Society’s original members! Plus: Black Canary meets Fate (written by Steven Grant with art by Eddy Newell); and Sentinel spends some time with the new Star-Spangled Kid (written by Ron Marz with art by Chris Weston). Plus, a look at the JSA’s headquarters; and profile pages on the new lineup and some new foes, with art by Roger Robinson, Darryl Banks, Scott Benefiel, Jason Pearson, Alex Maleev, Tom Mandrake, Eric Battle, and more! 64 pgs. Original cover price $4.95. 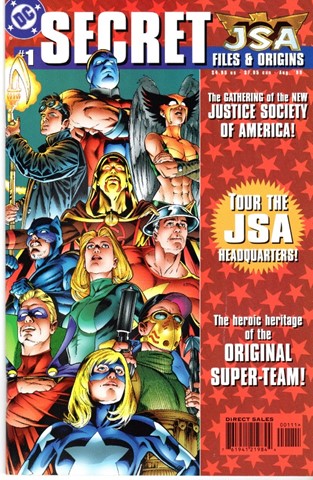 Written by James Robinson and David S. Goyer; art by Stephen Sadowski and Michael Bair; cover by Alan Davis and Mark Farmer In stores July 21. The newest incarnation of the Original Super-Hero Team meets a new ally? The all-new Hawkgirl? As the birth of a new Doctor Fate draws near, the JSA races to keep the baby destined to be the new Fate from the clutches of the mysterious Dark Lord, but little does the team realize that everything they do plays directly into the Dark Lord’s grand scheme. And what role will the mysterious new Hawkgirl play in this globe-spanning adventure? 32 pgs Original cover price $2.50

Cover by David Finch. Written by Geoff Johns and Peter J. Tomasi. Art by Ivan Reis, Patrick Gleason, Ardian Syaf, Scott Clark and Joe Prado. Brightest Day continues, but in ways you can’t possibly expect! What does Brightest Day mean to the DC Universe? Is everything from here on out going to be bright and shiny? No, Brightest Day means something else entirely, something we can’t tell you…yet. But we can tell you our heroes will need to rise up more than ever to combat the forces of evil, and a select few will uncover a secret that binds them ALL. It all begins in the specially priced issue #1! Original cover price $2.99. Grade: Near Mint

Cover by David Finch & Scott Williams Written by Geoff Johns and Peter J. Tomasi. Art by Ivan Reis, Ardian Syaf, Joe Prado and Vicente Cifuentes. Deadman discovers the truth behind the formation of the White Lantern and what it means to the twelve returnees and the rest of the DC Universe. Plus, Aquaman, Martian Manhunter, Hawkman, Hawkgirl and Firestorm discover the price for their resurrections…and why they may be doing more harm than good to the world. 32 pages, full color Original cover price $2.99

Written by Grant Morrison; Art and Cover By Howard Porter And John Dell. It’s humanity’s last stand in the extra-sized conclusion of Grant Morrison’s ultimate JLA story, “World War III!” With Superman trapped within the warbringer Mageddon, Green Lantern attempts to wrest control of his ring from the ultimate annihilator. As the rest of Earth’s heroes desperately try to quell conflicts around the globe, will even the intervention of the New Gods be enough to save humanity? FC, 48 PG. Cover price $2.99. Grade: Very Good

Cover art by Jerry Ordway. Ancient Histories starring Power Girl, script by Paul Kupperberg, art by Mary Wilshire; this is the “Post Crisis” origin, where Power Girl is shown to be descended from Arion of Atlantis. The Secret Origin of the Golden Age Hawkman, script by Roy Thomas, pencils by Luke McDonnell, inks by Tony DeZuniga; taken primarily from the story in Flash Comics #1 (1940). 52 pgs. $1.25. Cover price $1.25. Grade: Very Fine

What is interesting about this issue is that this came out only year or so Post-Crisis and appears that DC was not ready to give up on the golden age heroes even though they had been placed into limbo. The modern day Hawkman & Hawkgirl are mix of their previous incarnations, but there is a lot of golden age going on there.