Batman & Catwoman Got Married – Once upon a time, Batman and Catwoman got married and they had a daughter – her name was Helena Wayne and she was Huntress.

But wait! Didn’t Batman (Bruce Wayne) and Catwoman (Selena Kyle) get married just this past week in Batman #50 (July 2018)?

No. No, they did not. At least that is what I heard tell the New York Times reported and as a result pissed off a lot of comic book fans (see Fans were mad Batman and Catwoman’s wedding day surprise was ruined. But the story is still great.). 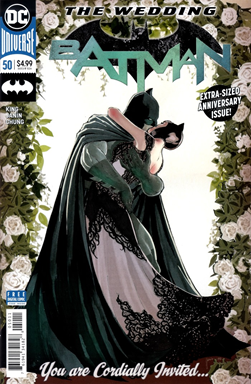 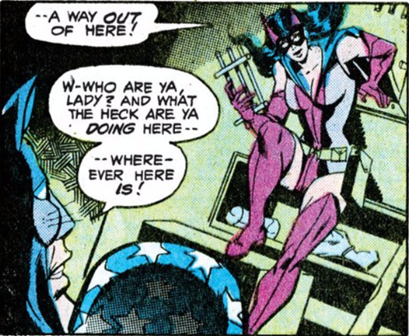 It is not until the third issue, All-Star Comics #71 (Apr 1977), that we get to see The Huntress in action. Very clever, those comic book publishers.

Of course, all this stuff took place on Earth-Two. In other words in another dimension from the one where the main continuity of the DC universe takes place, and that place being Earth-0 aka New Earth aka The DC Universe wherein Batman did not marry Catwoman last week.

…and with her the Dark Age of comics
In the late 80’s, a nice Italian girl turned anti-mob vigilante and overnight, Helena Bertrinelli became The Huntress. Her origin story was that her parents were murdered by a mobster.

Huntress appeared in a number of Justice League Unlimited episodes. Here she is sparring with Black Canary. 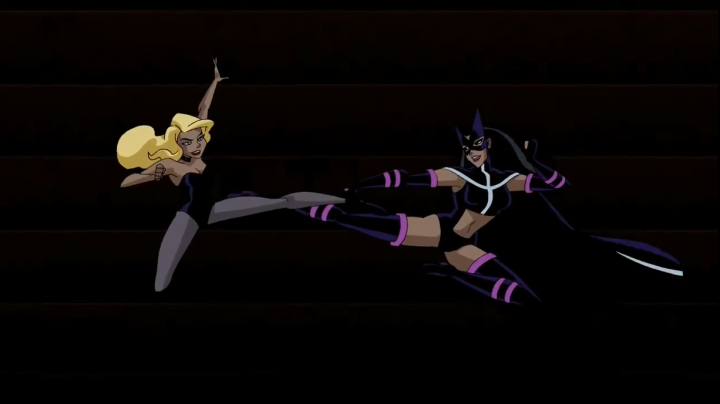 In the Justice League Unlimited, Huntress was romantically linked to conspiracy theorist, Question Mark. He was the only one who understood her (?). See season 2 episode 6 “Double Date“. This episode tells the origin story of the Earth-One Helena Bertinelli. 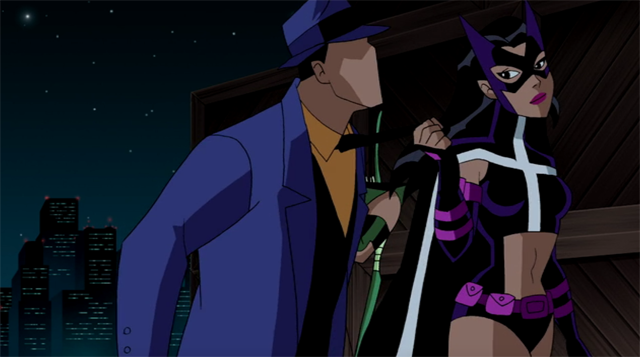 Between 2011 and 2012, DC published a six issue limited series titled Huntress. In this series Helena Wayne of Earth-2, along with her friend Kara a.k.a. power girl, travel through a boom tube into another universe that is known as prime Earth. Here she winds up in Italy where she takes on the persona of Helena Bertinelli. Using her knowledge of Wayne industries, she siphons off money from her late father’s alter ego. She is caught stealing by Robin a.k.a. Damien Wayne and she makes him promise not to tell Batman. Eventually she and Power Girl find their way back to Earth-2. 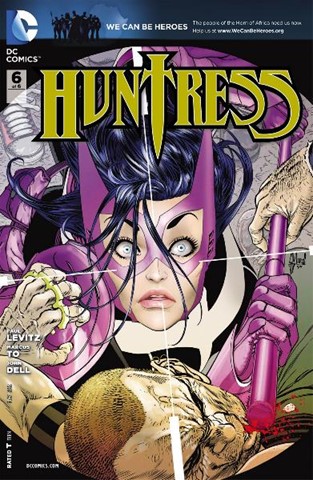 Yet that is not all. In the DC Rebirth Era, there appeared the Prime Earth incarnation of Helena Bertinelli with the same MO is the one who appeared in the late 80s. She made her appearance in Nightwing Vol 3 #30 (July 2014) as a member of the Birds of Prey, a group consisting of Batgirl, Black Canary, and Huntress.