Question: What do get when you combine a hotshot pilot, a pretty nurse, two nerds, and lots of dinosaurs on the land, sea, and air?

Answer: The silver age version of the “Suicide Squad”

And Another Question: What was up with Col. Rick Flag, Jr. and pretty nurse, Karin Grace?

Answer: This week’s page-of-the-week comes from Brave and the Bold #25 (September 1959). This was the issue in which debuted the Task Force X team known as the Suicide Squad. This was like 30 years before Harley Quinn first appeared in the cartoon series “Batman, The Animated Series”

On this page, pretty nurse Karin Grace professes her love for the team leader, Col. Rick Flag, Jr. For the long while, Karin seems to throw herself at Rick on every other page. Rick would respond to her show of affection by telling her that it would not be fair to the two other guys who had longings for her and that if the two of them were to become a couple it would cause problems for the team.

At times the sexual tension between the two was so thick that you could cut it with a knife. 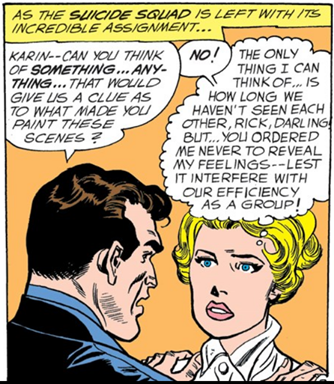 However, later on in the “mini-series”, Rick began to warm towards Karin. 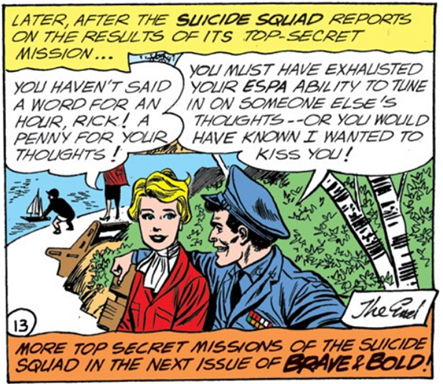 The exciting origins of the original Suicide Squad are revealed in this Silver Age comics tale SUICIDE SQUAD: THE SILVER AGE.

When a large wave appears carrying an object capable of destroying anything in its path, the authorities try everything they can to stop it from making landfall. With all other options exhausted, the U.S. calls in their new team, Task Force X, led by Rick Flag! But what’s this? An island in the South Pacific inhabited entirely by giant dinosaurs? A line of brave soldiers is all that stands between civilization and their giant deadly claws. Can the Suicide Squad save humanity from these oversize monsters?