This time around, I added eight new books to the Hawkgirl\Cover Girl Collection. That is more than I usually buy at one time and, shipping included, it still came in under $20. I picked up three from the 1980s and I think that completes that decade. For the remaining five, I decided to skip ahead to the 2000’s. I will present four covers in this post and the other four in the next post.

In this story titled “Out of the Ashes… Mekanique” writer Roy Thomas and artist Arvel Jones have the entire All-Star Squadron and an even larger cast of extra superheroes join in a battle against a giant golden robot from the 23rd Century named Mekanique.

Hawkgirl is on the cover with the entire cast. She is seen in the lower right-hand portion of the cover. The cover price was 75 cents and I paid $2.40. All other books were $1.70 each.

Inside the book, there is a page that shows all the members of the All-Star Squadron including Hawkgirl. All-Star Squadron is an offshoot of the Justice Society of America that first appeared in Justice League of America # 193 (August 1981). The team debuted in a special insert in that issue. The series ran for 67 issues from September 1981 to March 1987. All-Star Squadron was interesting because it was a retcon of an already established history of DC superheroes that had been published during the 1940s. The first known use of the term retcon (retroactive-continuity) was by the writer Roy Thomas in the letters column of All-Star Squadron # 20 (April 1983). 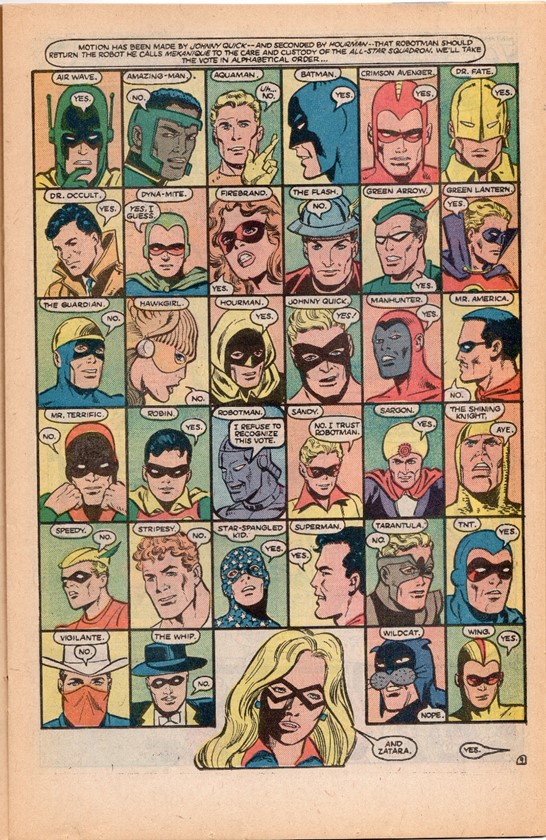 The cover for issue #59 evokes the 1927 movie Metropolis directed by Fritz Lang.

This issue from the second Hawkman series was written by Dan Mishkin, drawn by Richard Howell and inked by Carlos Garzon. On the cover we see Hawkgirl flying behind Hawkman and nearby standing in a silhouette is obviously Superman. The title reads “… And these three will decide the fate of Earth.” It further indicates that it is the final battle of the Shadow War – where “war” refers to an invasion of Earth by forces from Thanagar, the home planet of the Silver age/Bronze Age Hawks.

Superman does not show up until the last page and then you are directed to a crossover issue of Action Comics #588. Hawkgirl also appears on that cover.

This issue of infinity Inc. was written by Roy Thomas, drawn by Todd McFarlane and Tony Dezuniga. Hawkgirl is shown on the cover in one of eight medallions. She is on the second row; first column and she is not easily recognized.  The title below says “Hawkgirl“, but she is wearing the mask that she wore only for a short-time in Flash Comics series in the late 1940s.

The title reads “In Memoriam” and below the eight medallions it reads “Justice Society of America – In the Service of Their Country”.

On page 1, it shows the members of Infinity, Inc. on the grounds of the estate of Carter and Shiera Hall. They are mourning the death of Helena Wayne and Dick Grayson. Right here it tells you that this is a crossover issue related to “Crisis on Infinite Earths”. This legendary 12-issue series was ongoing at that time.

For example, one of the members of “Infinity” is Hector Hall, son of Carter and Shiera Hall. He is married to Lyta Trevor, daughter of the Earth-2 Wonder Woman and Col. Steve Trevor. Also, Norda (aka Nighthawk) was an “adopted son” of Carter and Shiera.

What we do not learn in this issue is that the missing members of the JSA have been transported into a pocket dimension known as “Limbo”. This is revealed in a one-shot titled “The Last Days of the Justice Society of America”.

This issue is from the fourth Hawkman series which ran from May 2002 until April 2006. There were a total of 49 issues and starting with a 50th issue the series was renamed “Hawkgirl“. It seems that they may have gotten a little ahead of themselves with this issue being retitled “Hawkgirl” on-the-fly. 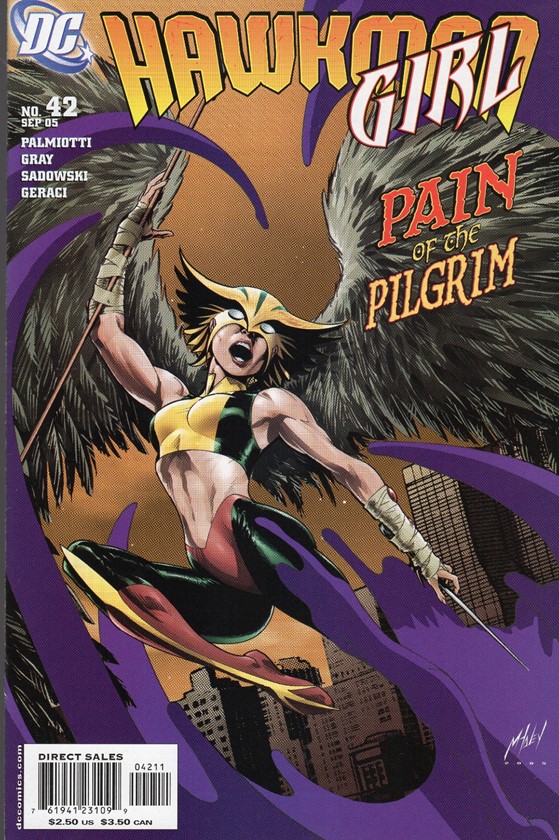 The story begins with a severely injured Hawkgirl hospitalized and in critical condition. In the previous issue, she was attacked by a heavily drugged Hawkman who was having hallucinations that Hawkgirl was the supervillain known as Lionmane.

Into this scene, enters a freakish looking, green-skinned, monster named the Pilgrim. This creature, literally from the grave, is seeking revenge against a distant ancestor of Hawkgirl and her uncle Speed Saunders. While Kendra is under sedation, her psyche is suddenly flooded by a host of memories from Shiera’s past lives. Suddenly there is an explosion, a hole is blown in the outer wall and Kendra is awoken from her coma. At one point, Hawkgirl retrieves a mysterious and powerful artifact known as the “Claw of Horus”. She then proceeds to beat the holy crap out of the Pilgrim.

For the first time, Kendra has experienced memories that belong to the past lives of her aunt Shiera. As established in previous issues of the Justice Society of America, Kendra has been a host of Shiera’s soul and now she is going through some sort of assimilation that will eventually result in Kendra becoming a reincarnation of Shiera.