I was looking at my wishlist and I noticed that I had missed six covers in the 1970s. Two of those I could not find in my price range at the rating I desired and three of which I was not too thrilled about the covers. This time around I decided to lower my standards when I saw that one the expensive covers in the Seventies-list could be had for $12 for a cover rated “Good 2.0”.

A rating of Good (GD) is not great. Here is a description…

A GD copy has major defects, but is still complete and readable. A GD copy will have a significant amount of damage, usually an accumulation of smaller defects punctuated with some major defects. Acceptable defects on a GD copy include: A vertical book-length crease, 1.5″-2″ spine split, cover or centerfold completely detached, major tears, heavy discoloration/brittleness due to oxidation, heavy amounts of staining, residue, and water damage.

This is one of a few covers where Hawkgirl’s cover presence is limited to small bust appearance. She and Hawkman appear on the top center banner above the title. From the mid-Sixties and on “Adventure Comics” was the primary vehicle for Supergirl stories plus one or more stories featuring other popular characters who did not have their own comic book. For example, another regular was Zatanna the Magician.

Hawkman and Hawkgirl appeared in this issue in a reprint of a story titled “Earth’s Impossible Day!” which originally appeared in Brave and the Bold Vol 1 #44 (November 1962). The story is about Hawkgirl feeling homesick for her home on Thanagar as she missing the Thanagarian holiday “Impossible Day” which happens to coincide with the American Independence Day.

As you can see in the scan below, the cover has some tears at the top and there was some schmutz on the cover. 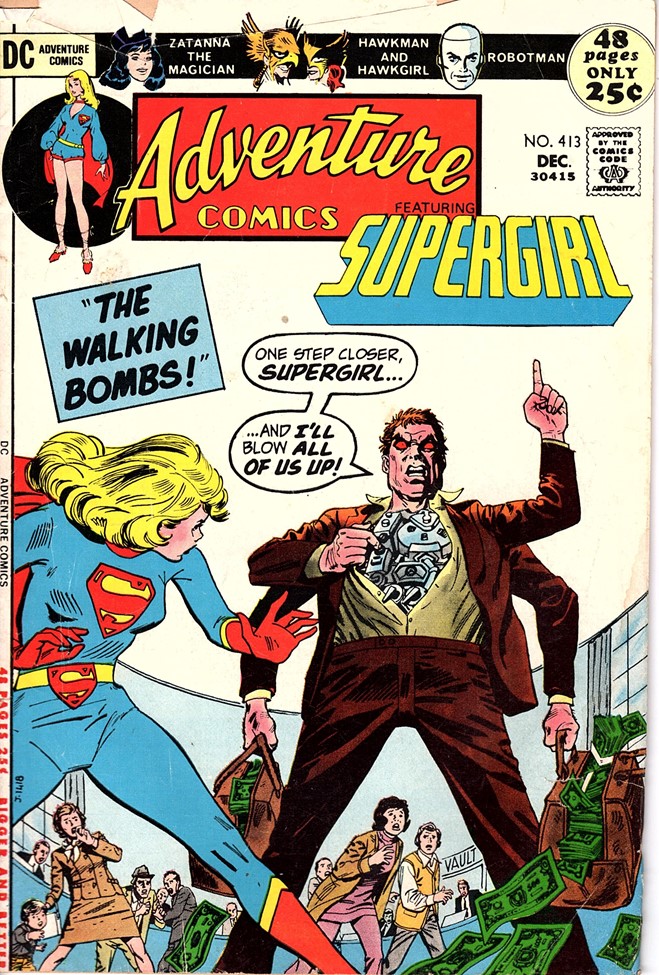 This issue was also known as DC 100 Pages Super Spectacular #10. There were 22 super spectaculars published between 1971 to 1973. This cover honors the world’s greatest super-females with a wrap-around cover that shows 19 selected female DC characters standing in a V-formation with Wonder Woman on one end and Hawkgirl on the other end. This is significant because Hawkgirl and Wonder Woman have been around the longest. The book is rated “good 2.0” and there is some slight tearing on the lower part of the binding.

This issue is the only annual “crisis” issues where Hawkgirl appears on the cover. Even then she appears as a bust upon the right-side of the banner. On the title page, HG is listed as a special guest star; however, she appears nowhere else within this issue. She does not put in an appearance in this story until part two in the next issue, JLA #136.