In Search of Star Sapphire – Pt. 4 – Star Sapphire was a nemesis of Green Lantern. She described him as her “friendly enemy” and before the sixties was over Carol Ferris appeared for the fourth time as Star Sapphire. This was in issue #73 of “Green Lantern” (December 1969) in a story titled “From Space Ye Came — And to Space Ye Shall Return!” written by Mike Friedrich and drawn by Gil Kane. The story was continued in issue #74 (January 1970)

In the time before this story, the complicated relationship between Hal Jordan and Carol Ferris had been made more complicated by Carol having become engaged to a man named Jason Belmore.

In this story, Green Lantern has been away from Earth for long while, taking care of business in outer space. He returns in time to take on an oil spill in the channel off the coast of Coast City.

After putting on a show for the “beach bunnies”, Hal is basking in the hero’s spotlight when suddenly…

…he sees Carol once again and all those old feelings come streaming back again.

Without asking, GL sweeps up Carol and flies her to a remote beach (recently cleaned-up thanks to the “ring-thing”) where Carol reveals to him that her engagement is over. GL is sorry, but he’s not sorry and although he once again silently declares that he will not get pulled in again, he just cannot help himself.

And then there is the matter of some jewelry that Jason gave Carol and insisted that she keep after they broke up. 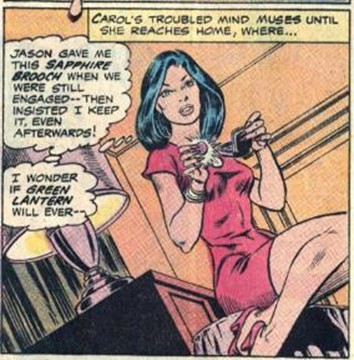 Although GL is able to nearly overpower Star Sapphire by having a greater amount of willpower, it does not stop her from dispatching Hal Jordan to deep space protected by a green aura that he cannot explain. Thus, is the end of ish 73. 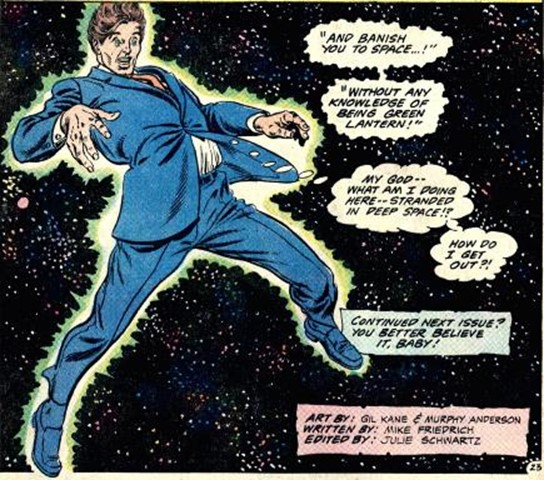 I will not reveal too much of what occurs in issue #74, except to say that things get even more complex when we see that Star Sapphire is in league with another of GL’s a foe’s, the red-faced renegade, Sinestro.

In the end, GL decides that it is time that Carol learns the truth and know that she is Star Sapphire. However, she cannot handle the truth.

Hal and Carol’s relationship remained “it’s complicated” from one age of comics to another. In the Silver Age, Carol made one more appearance as Star Sapphire. In Superman #261 (Feb 1973), she goes a little nuts when she thinks she witnesses Superman attacking Green Lantern – actually, Superman does battle with some rando at a place called the Green Lantern Inn.

Without going into detail let’s just say that this was not one Superman’s better adventures.

And although in today’s age, Carol Ferris remains the hostess of Star Sapphire, there was a time in the late Seventies when the honor went to someone else. In the 15-issue run of “Secret Society of Super-Villains” (1976 to 1978), the secret identity of Star Sapphire was that of Deborah Darnell (aka Camille).

But as you may guess, things were just not the same.

Before the end of the bronze age of comics, Star Sapphire as Carol Ferris made one last appearance in Green Lantern #129 (June 1980)…

…and once again it’s complicated…