In Search of Star Sapphire – Pt. 3 – Star Sapphire was a nemesis of Green Lantern. She described him as her “friendly enemy”. This was in her second appearance in early 1964. She made her third appearance almost two years later in December 1965. This was in Green Lantern #41. Once again, the cover art was drawn by Gil Kane (pencil) and Murphy Anderson (ink). The story was titled “The Double Life of Star Sapphire!” and it was written by the master of comic book writers, Gardner Fox. 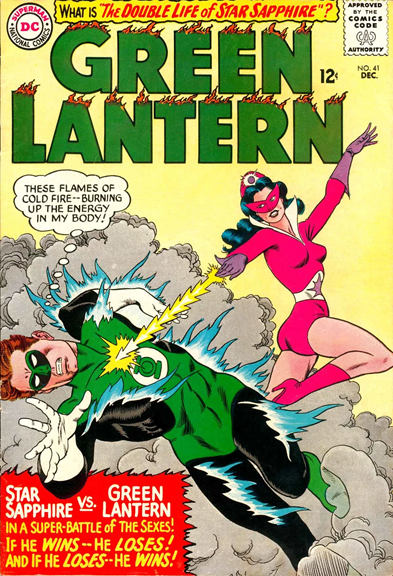 The story began with Carol Ferris flying around Coast City in a new aircraft that sort of looks like a UFO. The machine goes crazy and somehow a part of the aircraft wraps itself around Carol. Green Lantern comes to the rescue, but it is not before Carol is injured and winds-up in the hospital in a coma. During the night, Carol awakens under the control of a mysterious force. Slipping out the hospital, Carol goes to where the Zamoran sapphire is kept. Whoever is in charge apparently just leaves the stone sitting out wherever Carol can get to it. Finding the stone, Carol is once more transform into the Star Sapphire. Gil Kane, the artist who drew the story, seems to have given the characters a different look this time around. The look on Carol’s face when she has found the stone is rather comical, which is something that I consider to be quite appropriate for a comic book.

Once again Star Sapphire is conflicted between wanting to defeat Green Lantern and at the same time wanting to make GL her consort when she becomes the Queen of Zamarons.

Confusion reigns when another Star Sapphire appears on Earth. Her name is Dela Pharon, she is a Zamaron, and she has come to Earth to try and get Green Lantern to marry her. It is revealed the Dela caused Carol’s flying machine to act up.

Dela convinces GL that they should battle to see who is superior; however, as GL sees things, Dela does not fight fair. GL accuses the woman of tricking him but being the gentleman that he is he agrees to go to with Dela to Zamaron to be married. GL is actually pretending that he does not know that Star Sapphire is not Carol. A slight twist occurs when Carol shows up and does battle with Dela. Hal jumps into the fray and forces Dela to restore Carol back to normal and grant them safe passage back to Earth. 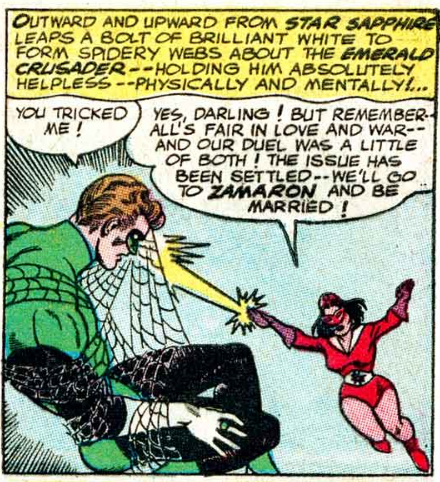 GL takes Carol back to her hospital bed on Earth. When she awakens she has no memory of what went on while she was on Xanador and Zamaron. The status quo remains, and Carol is still in a state of romantic confusion between Hal Jordan and Green Lantern.