This is a follow-up to the 11-part series that I wrote on the History of Hawkgirl which covered her appearances in the 1940s.

After finishing the series, I was going to continue the narrative right off with focusing on the Earth-2 Hawkgirl who reappeared in the late 1970s almost 30 years after she was last seen in 1948. Before I went to begin on the next installment I realized that I was not sure as to where this was going to lead next. I wanted to stick with the Golden Age Hawks because I erroneously believed that their history was less complicated than the history of the Silver Age Hawks of Earth-1.

At that point, I had not yet read Crisis on Infinite Earths – (I must be the world’s worst procrastinator) – and I was only vaguely schooled on what happened with Earth-2 and the JSA post-Crisis, so I figured that I needed to spend some time researching the JSA post-crisis. 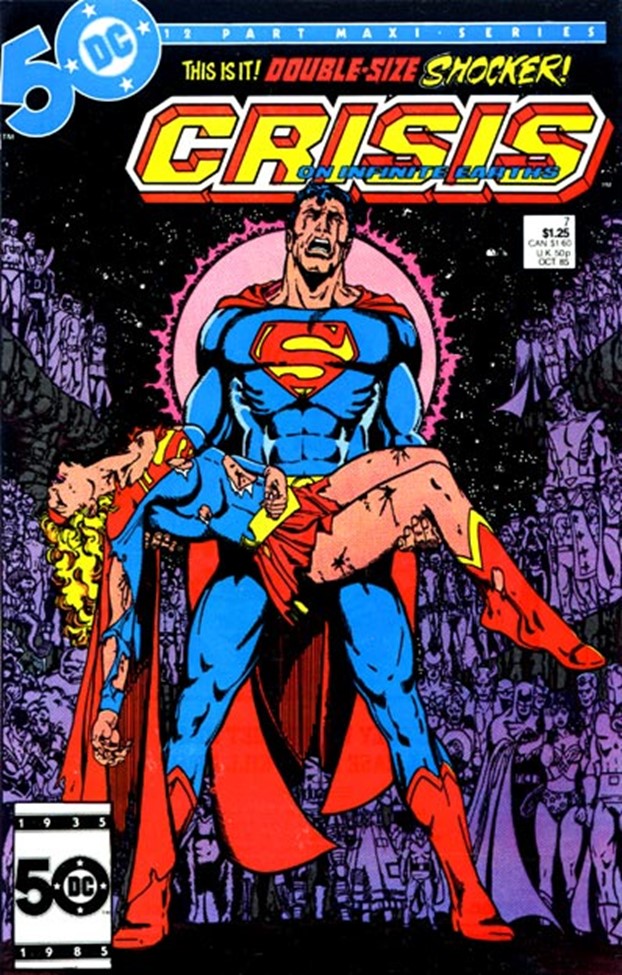 Before I go any further I should briefly explain for those just now tuning in, who I am and where I am coming from. I am a sixty-something male who had a very strong (fanatical) interest in comic books between the ages of 6 and 16. This was in the mid-Sixties to early-Seventies. I figure that I stopped reading comics when I started smoking cigarettes to try impress girls. I could not have afforded both – comics books and cigarettes that is. In 1973, I flipped out when my mom threw out all my comic books although I had not touched them in a couple of years. So, as you might guess, I am Silver-age, Earth-1, Pre-Crisis kind of guy.

I believe that the first Hawkman comic book that I read was Hawkman #3 which was published May 1964.

I remember seeing Hawkgirl on the cover and thinking that she was a female “Robin”, that she was Hawkman’s niece or daughter and that she was a teenager. I distinctly remember reading Brave and the Bold #34 even though it was from 1961. Who can forget seeing a giant dragon coming out of a tollway tunnel? We bought older books all the time because we bought all our comic books at a Used Book bookstore and along with used paperbacks, they sold used magazines and comic books. We could get 5 comics for a quarter.

I was a big fan of Justice League of America. I remember that anytime I saw Hawkman on the cover of JLA, I wondered why Hawkgirl was not being shown on the cover also. When I did see her, I called it a “rare bird sighting”.

As a result of all this, the Hawkgirl and Hawkman that I was familiar with were the Silver Age, Earth-1, Pre-Crisis Winged Furies. And because I felt like I knew all about the “dynamic duo” of Midway City. This was another reason why I wanted to stick with my research into their Earth-2, Golden Age counterparts.

This series of posts will be a little different because I do not plan to be going issue-by-issue in the same way as I did with the first series of posts. I plan to cover a number of different book series and period of about 60 years. To shake things up a bit, I am going to start with something that occurred just this past month (week of August 15)… Dark Nights: Metal #1. (see The Mystery of Hawkgirl). 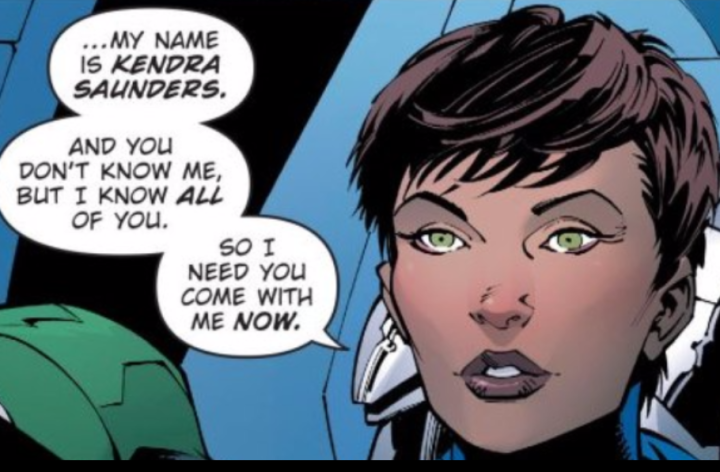 Did this illustration get your attention? There is a lot of going in this picture in terms of questions raised, but I am going ask only one of those questions right now. The question is how is she related to the Shiera Saunders who was discussed in my previous series of posts? To some the answer is very simple: She is the grand-niece of Shiera Saunders – the grand-daughter of Shiera’s brother, Speed Saunders. Yet, the question I am asking is how are two related in terms of continuity. In other words, besides the family connection, how does the story of this woman who was Hawkgirl as recently as five years ago correlate to the story of the woman who became Hawkgirl in 70 years earlier.

The question is how did we get here and instead of going issue-by-issue I want instead to go by milestones that occurred in the history of Hawkgirl. As before, this history will look at the dynamic duo from the perspective of the better looking and smarter member of the team – Hawkgirl.

As I stated above, I felt that before I started that I need understand where this was going. I know that the story for the Golden Age Hawkgirl started-up once again with the revival of All-Star Comics in the late seventies and from there it went to All-Star Squadron.

Then came the Crisis and then there was something about the Hawks and the rest of the JSA ascending into the heaven where there became gods and they did battle with the demons through-out all eternity. Then for me, the story picks up again at the end of the 1990s where first Hawkgirl, and then Hawkman, reappear, rejoin the JSA, and get their own comic book series.

But what happened in between?

I was very confused until I came across some graphics and an article produced by a super fan of the Hawks, Tim Board at the Facebook group HAWKWORLD.

There were two graphics that caught my eye.

However, I am not in agreement with Tim, regarding Carter and Shiera Hall coming out of retirement and joining the JLA. I am aware that he references “Hawkworld vol. 2 Annual #1” (1990) and “Hawkman Vol. 4 #15” as sources for his view of history. I will discuss these post-crisis controversies in later posts. 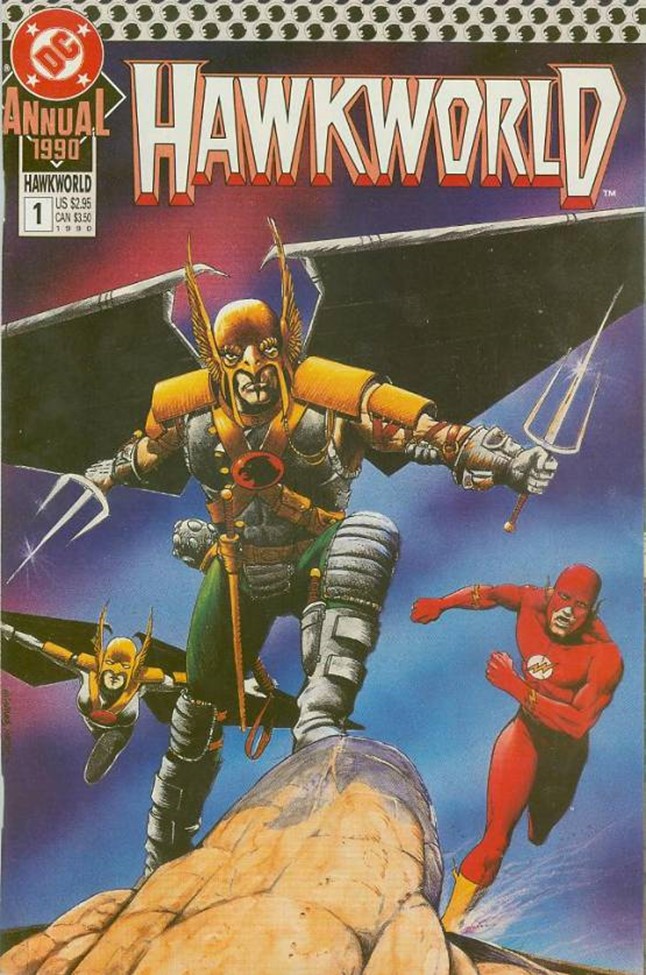 I understand that retconning serves a purpose. It is supposed fix things that are broken. However, there is the old saying “If ain’t broke, don’t fix it.”

I think that whole thing could have been handled much better.

At the end of Hawkman Vol. 2 and the end of JLI in 1989, the Hawkman continuity was not broken.

There were two sets of Hawks just as there had been since the dawn of the Silver Age. One set, the Thanagarians, were alive and well on planet “New” Earth and the second set the one from Earth-2 was not so, well. They were in limbo fighting the battle of Ragnorak with all the other JLA. The Earth-2 Hawks appeared again during “Zero Hour”. And then what happened?

I plan to explore all of this in the next series of posts on “The History of Hawkgirl” and I will start with the appearance of a pair extraterrestrial police officers, who arrived on Earth in 1961. Their names were Katar & Shiera Hol and they came from the planet Thanagar…