I found that I was stuck in the Seventies and so did something that I said that was not going to… I jumped ahead.

Since my return to comic books began about six months ago, my reading plan focused primarily on two things: A) Finding Hawkgirl and B) Reading all of the JLA/JSA cross-over issues leading up and continuing through the mid-eighties Crisis on Infinite Earths.

I have completed volumes one through three of the Crisis on Multiple Earths series that collects all of the annual JLA/JSA meet-ups that occurred between 1963 and 1983. I was just starting volume 4 (1975 to 1977) when I decided to take a detour into the future to continue my search for the sometimes elusive Hawkgirl.

In my studies of Hawkgirl, I ran across five must-read issues (as in, I must read these issues):

The four-part story-arc in JSA takes places shortly after Kendra Saunders has become Hawkgirl and a member of the reformed Justice Society of America. She has only recently come back to life after death by suicide and her body has become the host of the spirit of her great-aunt, the original golden age Hawkgirl, Shiera Sanders-Hall.

The young woman is having difficulty accepting that she is not “herself” and the other members of the JSA are “there for her”. 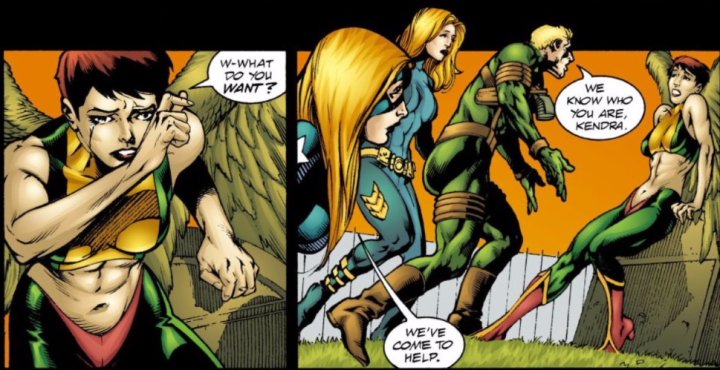 By some cosmic force she is whisked away to the planet Thanagaria where she has been brought to help in reviving the dead Carter Hall (the golden age Hawkman) who previously had been merged with the silver age Katar Hol (like I said previously, it’s complicated).

Some of the illustrations are reminiscent of the great comic strip artist Winsor McCay of Little Nemo fame.

When Carter is resurrected, he recognizes “Kendra” as “Shiera”.

And he does try to put the make on her, but “Kendra” is still not ready to accept what has happened to her and spurns Carter’s advances.

They do however join forces once again as Hawkman and Hawkgirl and from the JSA series there is spun off the Hawkman series which was published between 2002 and 2006 for a total of 49 issues. Before there series was ended it was retitled Hawkgirl and continued for another 16 issues until finally ending in 2007.

I had to read issue 15 thru 17 of Hawkman. This was a three-part story titled “The Thanagarian”.

In this story-arc, its 1961 all over again in that Shayera Hol of Thanagar has come to Earth in pursuit of the shape-shifting criminal master-mind, Blyth Rok. This just as what the silver-age Hawks did in their first appearance in The Brave and The Bold #34.

When Shayera meets Carter she sees a bit of Katar left over in him (again, complicated) 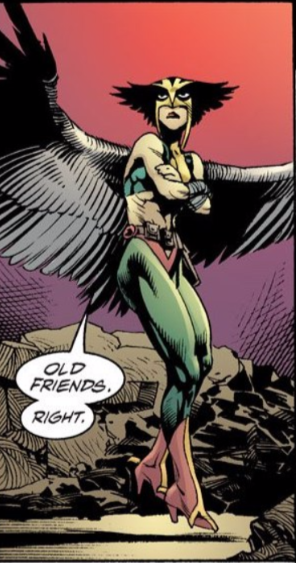 Shayera recognizes that Carter is not Katar.

And Shayera comes to realizes that not all Earthlings are cattle and sheep.