As I mentioned on an earlier post, back when I was kid reading comic books in the 1960’s, I had taken an “interest” in Hawkgirl, the winged companion of Hawkman.

What I had noticed was that out of all of the DC Comics heroes and heroines that I knew of, she seemed to be the rarest of all. Rarely would I see her on the cover of a “book” and also it was equally rare that I would spot her within the pages of a story. When I did see Hawkgirl it was noted as a “rare Hawkgirl sighting”. At the time, I do not think that I even knew what her relationship was to Hawkman – Daughter? Wife? Girlfriend? I did know that she was not a member of the Justice League and I never understood why.

Not too long ago, my interest in Hawkgirl was revived while, over the course of the past few months, I watched all 100 or so episodes of the two animated series “Justice League” and “Justice League Unlimited”. They are all available for viewing on Netflix and if you like animation, I recommend these two series as the illustration is fabulous and the stories are excellent.

In watching the series, I fell in love with the Shayera Hol (Hawkgirl) character. It was that “chick with wings” thing all over again. 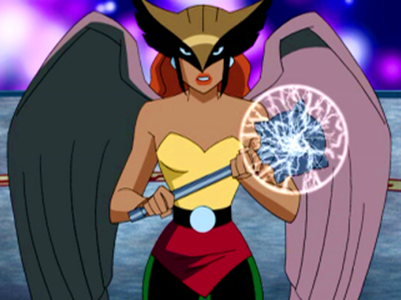 If you only watch a few episodes, I recommend the last three episodes of the first series and then there is the continuation of Hawkgirl’s story throughout the second series “Justice League Unlimited”

In these series, the character does not like to be called “Hawkgirl” and prefers that she be known as Shayera.

I will not go into too much detail because I do not want to spoil the story, but in my opinion these DC animated series are some of the best scripted shows on television. It is just too good to be wasted on the young.

Throughout most of the first series, Hawkgirl is never seen without her mask until one episode where Green Lantern removes her mask so that he may kiss her. 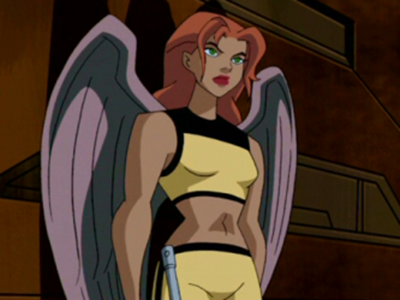 Then throughout the two series, Shayera is involved in a complicated love affair with Green Lantern and we learn a secret when Green Lantern and Batman go on a trip to the future and Green Lantern meets his and Shayera’s son, a future member of the Justice League named Warhawk. 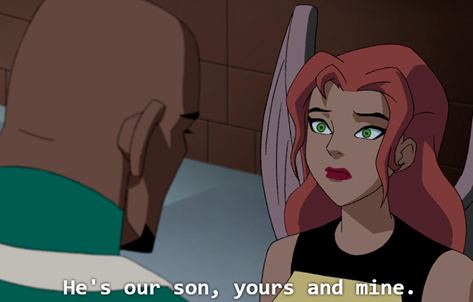 Yet when this revelation becomes known to Shayera, the pair cannot figure out how that is supposed to happen because of a number of complexities — her betrayal that ended their relationship in the first series and the fact that he is currently in a relationship with Vixen. This “cartoon” is far too sophisticated to be considered kid stuff.

The story involving Hawkgirl and Green Lantern is just one part of the “epic tale”. As far as romance goes, there is something going between Batman & Wonder Woman, Huntress & Question, Black Canary & Green Arrow, and the Flash & just about every girl he meets. Highly recommended these two series, if you like super-hero romance mixed with super-hero crime fighting action.

So, with this revived interest in the Hawkgirl character, I have been struggling with how to go about tracking her in the “Pre-Crisis” ages.

I recently purchased some “first appearance” issues and one of them was JLA issue #31 from November, 1964. It is in this issue that Hawkman joins the Justice League. 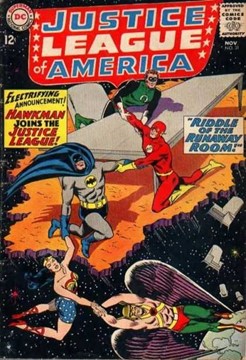 The origin story for the Silver-age “Hawks” living on Earth-one is that the couple was married alien police officers from the planet Thanagar who come to Earth in order to study police techniques. The Silver Age Hawkgirl is introduced as Shayera Hol (phonetically identical to Shiera Hall), who appears in costume as of her first appearance. 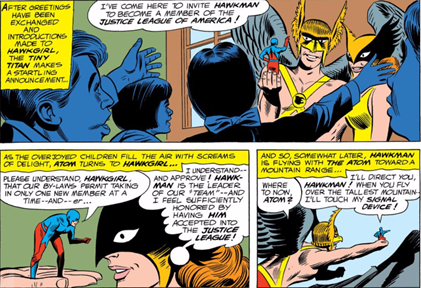 This is her only appearance in this issue. Thirteen years would go by before the JLA gets around to asking Shiera to join the group. This occurs in 1977 in Justice League of America issue #146. (I have not read this issue yet, but I did find it and it is on my wishlist.) 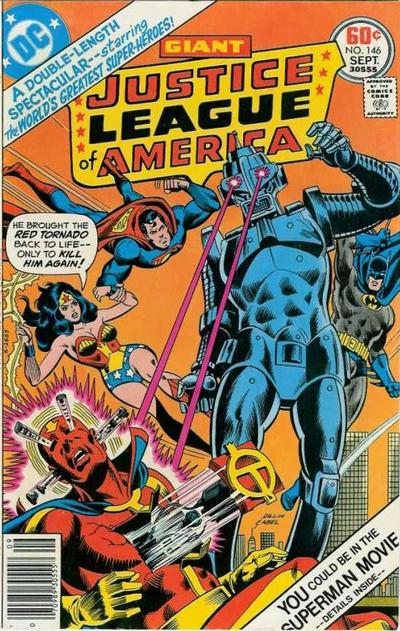 Also, I have learned that in 1981, Silver Age Hawkgirl changed her name to Hawkwoman in the Hawkman backup feature of World’s Finest Comics #274.

Unfortunately, this issue is not available at ComiXology and it does not matter because to me she will always be Hawkgirl.