Supposedly this drawing shows characters related in some way to the JSA or JLA during the Pre-Crisis period from 1940 to 1986. This is a portion of the cover of volume 5 of the JLA collections entitled “Crisis on Multiple Earths” 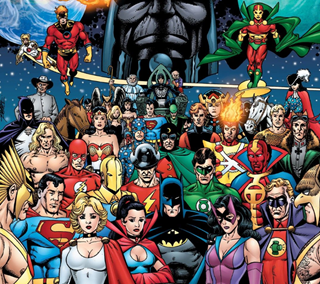 It bugs me that I cannot figure out who the female character is that is standing between Power Girl and Batman. She does not fit the description of anyone that I know of.

Every list I have seen shows there were only seven female members of the JSA or the JLA in the Pre-Crisis period. There were two Wonder Womans: one on Earth-2 (from the 1940s) and one on Earth-One (from the 1960s). There was one Black Canary, who was a member of both groups. She having left Earth-2 for Earth-1 in issue #74 of JLA. (Note: that below I am displaying the characters as they appeared in the cartoon series “Justice League Unlimited”)

Hawkgirl and Zatanna lived on Earth-One.

Post-Crisis, Super Girl was a member of the JLA in the animated series Justice League and Justice League Unlimited. She then left to join the Legion of Super Heroes after falling in love with the 30th century, Brainiac 5.

Also, there was a character named Liberty Belle who was around in the 1940s but she did not join the JSA until it was rebooted in the 2000’s.

Also, Post-Crisis and the New 52, there have been other additions that included female heroes such as Fiero, the Brazilian super-model turned super hero, and there is Star Girl, step-daughter of the Star-Spangled Kid.

Yet no one I have seen fits the description of the dark-haired woman in blue with the red cape.